“We know who..” said Red Shirts 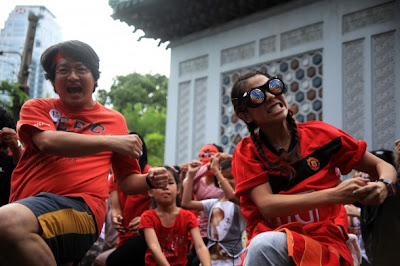 “We know who..” said Red Shirts

Mr. Sombat Boonngamanong (42) is a man of sunny and smile, wearing a ‘red shirt’. After the April-May crackdown on Red Shirts at Ratchprasong in central Bangkok, which killed more than 90 – mostly civilians -, Red Shirts shortly ‘disappeared’ in public eyes while developing their outrage even further but silently. It didn’t take long time for Red Shirts to renew their campaign in public, to which Mr.Sombat has significantly attributed encouraging silenced anger onto the rather fun and festive-like street performance. 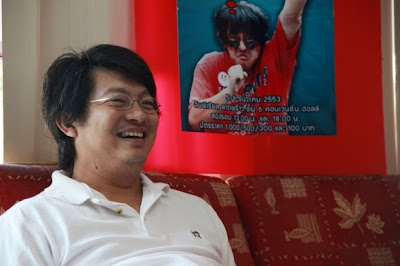 “I went to Ratchaprasong to tie red ribbons with the street board of ‘Ratchaprasong’ a month after the crackdown. I suggested other Red Shirts to do the same thing” said Mr.Sombat. “Police arrested me to detain for two weeks. So the renewing activities have become news” he added. The long time NGO activist, after released, has been organizing more activities such as red aerobic and dead bodies performance in symbolic venues.

His audacious initiative has attracted more numbers and attentions, which eventually have been led to twice of mass demonstrations at Ratchaprasong within six months.

On November 19, two month after the rally to mark four month on the crackdown as well as fourth anniversary of the 2006 military coup on September 19, tens of thousands Red Shirts turned out in central again to mark, this time, six months on the crackdown. Defying the emergency decree, which rights group called for the Thai government to lift, Red Shirts have shown off their evident return en mass. Candle light vigil to remeber their fallen fellows on one hand, singing, dancing and chanting for hours, such as “Ti Ni Mi Khon Tai”, which means “People died here”, were heard on the other. 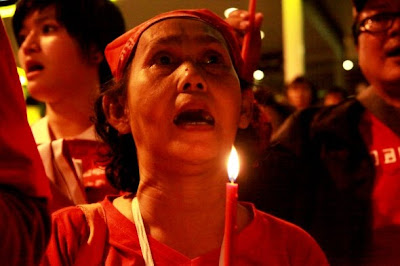 Tens of thousands Red Shirts remember their fellows and family who got killed six months ago. (Photo @ Lee Yu Kyung) 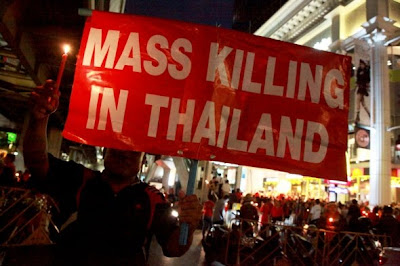 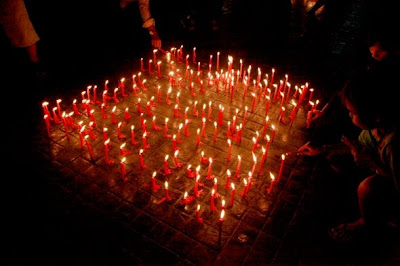 However, there was something new slogan chanted by surprise, as the rally was closing down. That was “Ai-Hia Sung Kha, E-Ha Sung Ying”, which means, “Bastard ordered the killing, Bastard ordered to fire”. The similar slogans were heard on September 19 as well, according to the Nation report.

“We chant this, because…” said one red shirt “…we want to show that we know who ordered to kill and fire.” But she didn’t specify who they meant.

Besides, there have been reports about graffiti which can be interpreted as violating the country’s harsh Lese Majeste Law. This phenomenon, never was imaginable six plus months ago.

The Red Shirts have now tried to push the limit. 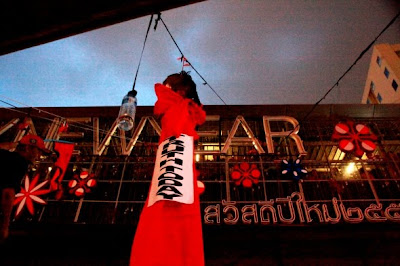 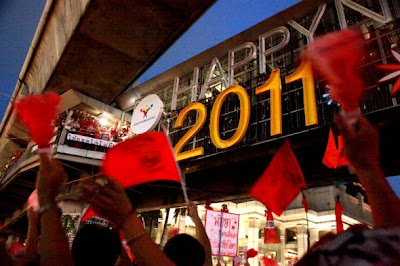 The returned Red Shirts said to be organizing in small sized different groups without centralized leadership, which is, according to one activist who doesn’t want to be named, “a better way to continue” their movement.

“When there were core leaders at center, the authority could easily target the leaders to weak our movement” he argued.

It remains to be seen where the returned red shirts would be heading for without a core leadership-structure. But sure thing is so far that Red Shirts look resilient.

“Not only Thaksin, but also leaders, whom Red Shirts are now beyond. People have been empowering themselves more and more” said the activist Sombat. “Our goal is to change a mind-set of Thai society, where you have ‘owners’ or ‘superior’ of this country, while grass roots are treated as like ‘visitors’ or ‘inferior’ citizens” he explained.

Meanwhile there was an order from the army chief General Prayut Chan-O-Cha, ahead of the demonstration on November 19, who warned that emergency laws prohibited carrying items like clothes, sandals or photographs deemed to ‘incite disunity’. Colonel Sansern Kaewkumnerd, the spokesperson for Center for the Resolution of Emergency Situation (or CRES) has reportedly said “It is police who will decide what might be inciting disunity”, indicating the spokesperson himself has little idea about criteria. Nontheless, severe penalties up to two years in jail or a maximum fine of 40,000 baht – or both- were set for violators of the ban. A few flip-flops vendors have been reportedly arrested for selling shoes bearing Prime Minister’s face in recent months.

One of the reactions to this measure was from the establishment-friendly Bangkok Post. The Post wrote an editorial entitled “Democracies don’t ban items of free expression” on November 21,

“By what authority does the military, in this case through the CRES, has the power to arbitrarily decide what is lawful and what is not and set penalties?”

The Prime Minister Abhisit Vejajiva has reportedly expressed his displeasure of this order as well. 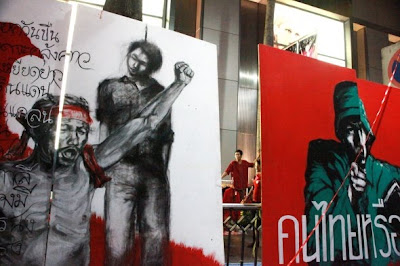 Red Shirts return to the street of with new slogans, among which is "Ai ha Sung Kha" expressing that they knew who ordered to kill (Photo @ Lee Yu Kyung) 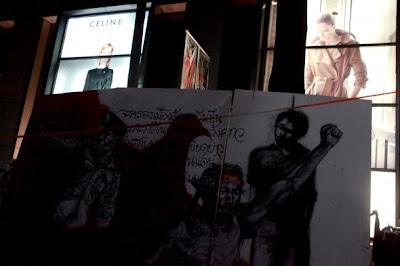 Red Shirts return to the street of with new slogans, among which is "Ai ha Sung Kha" expressing that they knew who ordered to kill (Photo @ Lee Yu Kyung)

Truly speaking, the has been largely controlled by the military dominated CRES, which can be above the administration led by Oxford-educated Prime Minister in civilian cloth. Interestingly, on November 22, the deputy Prime Minister Suthep Taungsuban has reportedly said “The CRES is not trying to take power or staging a coup when it imposes special laws. It only wants to keep the situation orderly”

Such measures to maintain ‘the situation in order’, however, may brew up many more new slogans in Red shirts, who have been now recovering, returning and radicalized. The April-May crackdown and developments onwards have proved it. 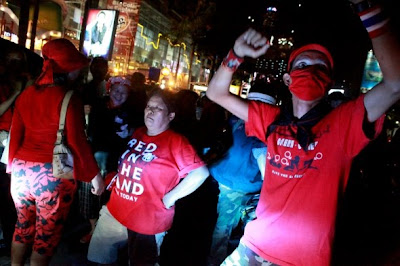 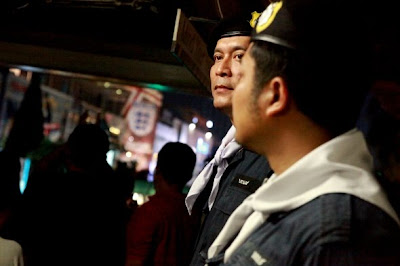 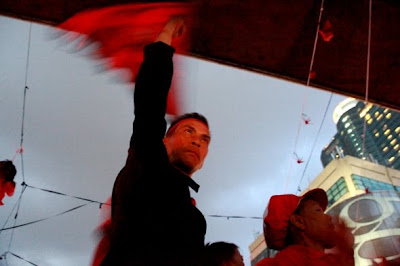 According to the Nation’s latest breaking news on November 26,

I wonder what regulation the Colonel talked about…? Was there any particular regulation for these items? If the regulation refer to any article of any law, then it should be the court, not the colonel, who judge whether one violated or not.

“To change a mind-set of Thai society is our goal”

Khun Sombat (42), the long time NGO activist has been of great help to recover red activity in public. He has often travelled to Issarn – the country’s north east – where many Red Shirts are originated from, to promote red activity in peaceful. Recently I’ve talked with him at Red Sunday Group office. Excerpts.

Q. It seems Red Shirts are gradually recovering. There were tens of thousands people gathering at Ratchprasong on November 19 to mark 6 month since the May crackdown. What has been developed in Red Shirts movement for the past 6 months after the bloody crackdown?

A. Let me explain an evolution that I’ve involved in. Since the crackdown, I’ve started to use Facebook, on which I launched Sunday campaign. First I have suggested red supporters one logo, in which “I am a red” was written, for their profile picture of Facebook. Many changed their pictures on Sunday. So it worked out.

Second, I invited five friends to café having political discussion, and encouraged them to make the same meeting composed of five others wearing red shirts. The campaign of ‘Five Reds at Café’ has been spread out to produce many red shirts gathering for a discussion with their fellows. One day, we went to BigC at Ladprao (the north east district in ) to have 100 people.

Another activity was conducted one month after the crackdown. I went to Ratchaprasong to tie red ribbons with the street sign of “Ratchaprasong”. I suggested other Red Shirts to do the same thing, “When you go to Ratchprasong, please you tie a red ribbon”. But police arrested me. I was in police custody for two weeks.

But my story came to public. My comrades in NGO field published open letters in a protest. Many people talked about me. So the renewing activities have become news. When I was released, I tried to do it again.

These are all public activities in simple, soft but creative. Not aggressive. Then people would feel that it’s possible to re-new red activity.

To be honest, people got afraid seeing their fellows, friends and family were gun down. But they seemed to be encouraged when they saw my activity. “Ok, Khun Sombat is doing this, why shouldn’t I” they might have thought. (laugh)

Q. Have you noticed radicalization among Red Shirts more than before in the last six months?

A. I can’t comment on that. I don’t agree with every single measure or slogan. I only can say that I support the spirits of Red Shirts movement.

Q. What are the spirits?

A. First, they are conscientiously fighting against suppressor. Second, it’s about democracy. Democratization in is unstable but in process. You see, the authority in democratic county should have not used ‘sniper’ and ‘gun’ to control mass rally. It was not the way of control the mass at all, but of killing.

Q. Then what is your observation about democracy in at current stage?

A. It’s not like we have no democracy at all, but we have no democracy (laugh). The middle class who have power and freedom might have felt they are the owner of the country and there’s democracy. But the reality with which the poor face would be different. This is why middle class couldn’t understand why Red Shirts from provinces came to to rally. So they told Red Shirt ‘go home’ or ‘go farming’. There are two different faces of democracy in .

Q. Where would you say is Khun Thaksin’s status in current and future Red Shirts movement?

A. Many Red Shirts love him. True. But Thaksin is not a goal. The goal is to achieve democracy. Thaksin’s power has been decreasing among Red Shirts. Not only Thaksin, but also leadership is being beyond by Red Shirts now. People have been empowering themselves.

But problem is, in my opinion, while there are some activities and new leaders trying to build up in , there’s not much activity in rural area, which is a base of many Red Shirts. I try to encourage people up there ideas setting up themselves.

Q. Your group is one of many Red Shirts. How often do you correspond with other groups?

A, Not much though, we do have. When we need to join forces for certain activity, we exchange email and phone. One example was the ‘Red around the World’ rally on September 19 on the occasion of 4th anniversary of 2006 coup and also 4 months since the crackdown.

My idea is to promote small but many groups. And we would keep our network between groups to finally build up Red Shirts movement in huge once again. There is supposed to be a decentralized leadership than centralized one.

Q. What about Khun Jatuporn Prompen, one of the core leaders, who has not been arrested? What sort of communication you have had with him?

A. I believe Jatuporn is also happy with our idea (of decentralized leadership). There is no dispute regarding this. We have known each other more than 20 years. Last week, for about one hour, I discussed with him on the red campaign, but not that much communication in general.

Q. What is your next plan?

A. We plan a workshop named “” from next year.

Q. What would say is a goal of your campaign?

A. The goal of our group’s campaign is to change a mind-set in Thai society, where you have ‘owners’ or ‘superior’ of this country, while grass roots are treated as like ‘visitors’ or ‘inferior’ citizens. Every individual is equal. Again, we want to empower ourselves.